I have wrestled with myself on whether or not to even put this up. I consider myself fairly competent up there, but this time, I blew it. Bad.

A few years ago, when I first got back into spending time in the high country, I heard about this lake. You know, one of those really cool spots in the high country. Hard to get to, big Goldens swimming around, that sort of thing. It sits high atop this big ridge, nestled snugly down in the only bowl. I have looked at it a hundred times on Google Earth and Trail Behind. Mind you, neither of these tools show the actual trail, but it is really simple. Walk up the bottom of the valley for 6.5 miles, turn, and go straight up the side of the ridge for another 1.8 miles and a couple thousand vertical feet of elevation gain. I have talked to several guys that have gone there, and heard what a great experience it is.

So, here we are, a couple seasons later, and I finally got my shot to get up there. I talked my lovely girlfriend into making the trek with me, even though she knew it was gonna be a pretty tough march back in there. Having looked at the lake a million times on topo's and having spent a good amount of time in that valley, I decided not to drive the hour out of my way to pick up a map. That's right, backpacking without a map. You can see the bowl from the car, you've been in the valley before, there is only one turn to make, what can go wrong? Right?

We finally hit our trailhead by about 2pm and made the immediate ford of the small river. 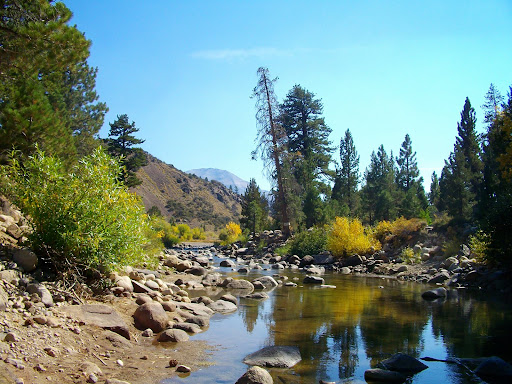 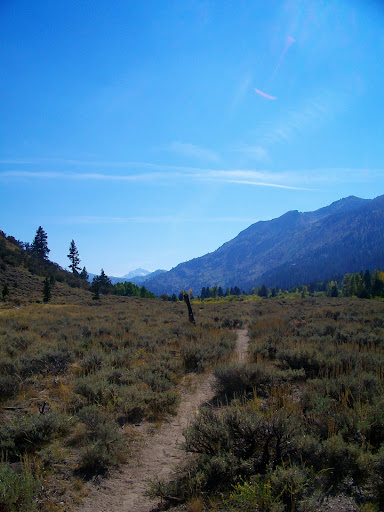 After a couple miles, we entered the newly annexed portion of the Hoover Wilderness, 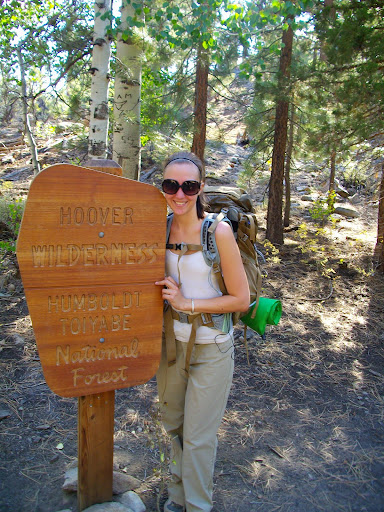 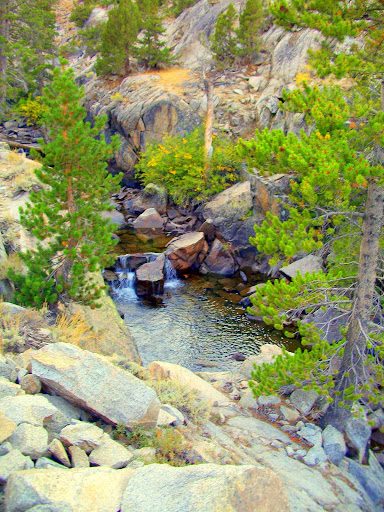 We continued on, for what seemed like a lot more than 6.5 miles without seeing our trail take off up the hill. I started to become concerned that we had passed the fork. Finally, after nearly four hours, a fork in the proper direction presented itself, and we set up camp for the night. We planned to hit the lake the next day and return to this base camp for our final night.

We awoke early the next morning, loaded my pack for the day and started up the hill. For much of this hike we paralled this nice little stream, stopping often for ice cold water. 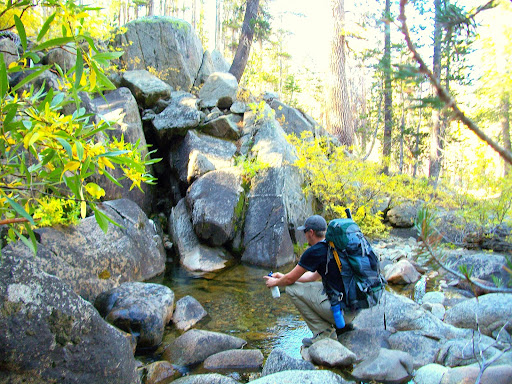 As we made our way up, I started getting this queasy feeling. We werent gaining enough elevation. I couldnt see where we were in relationship to the target bowl, due to all the trees and the deep little cut we were in. But we persevered. After awhile I was pretty sure that we had also hiked past the prescribed 1.8 miles. Then the trail opened up to this beautiful meadow. 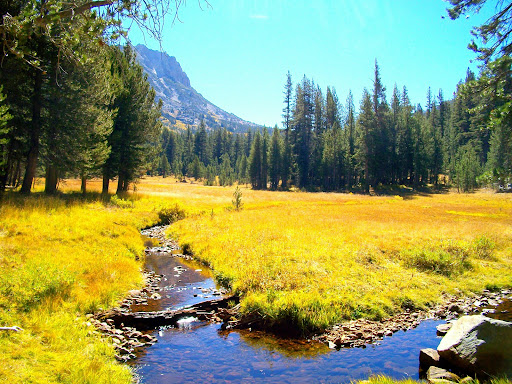 Unfortunately, the beauty was severely marred by the realization that I had most thoroughly boned us. No fancy dinner, no boring conversation, just a good ole fashioned prison boning. I knew immediately where we were, and I knew that with the amount of time we had left, we would never see the lake. Regardless of how we went wrong, we just would not be able to salvage the trip. Truly a disappointment.

After delivering the bad news to my companion, we ate lunch, I fished, and she found a pretty sweet lounge chair. 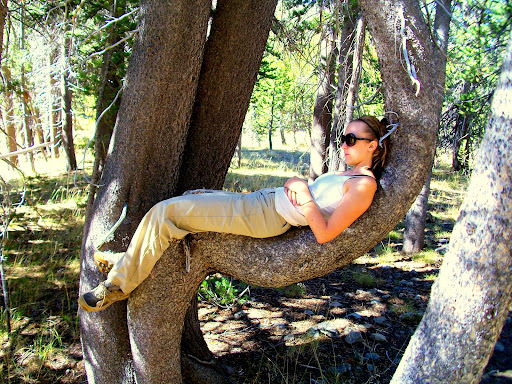 Instead of twenty inch Golden Trout set against the moonscape beauty of an alpine bowl, I caught half a dozen of these. 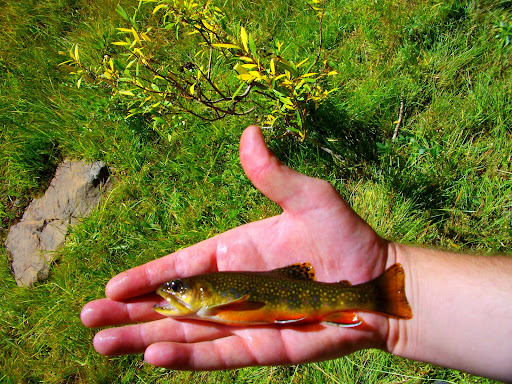 So, tails tucked, we headed back down to basecamp. We arrived, I slept, she read. The mood around camp was not what I would call jovial. I had led my poor girl on a 20 mile goose chase and she was not very pleased. Needless to say, neither was I. After briefly entertaining the idea of packing up camp and hiking out in the dark, we thought better of it and crashed.

The next morning saw lifted spirits, if for no other reason than that the torment was about to be over. We made the hike out in a very quick 3 hours despite the fact that I was carrying a much heavier pack than I am used to. The hike out was actually pretty enjoyable. 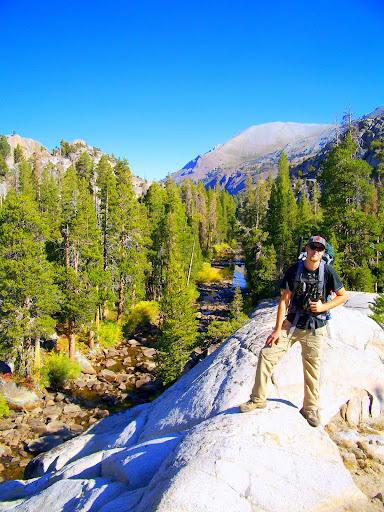 There were big bear prints on the trail for most of the way down, and we entertained ourselves by alerting the bear to our presence. I wonder if bears find satirical imitations of Christian Bale's Batman voice alarming or antagonizing. Either way, I figured if one simple voice could almost ruin an otherwise great movie, simple woodland critters would find it repulsive as well.

We made it back to the car in great time, spirits high. We had a game plan to salvage the trip. It involved Jolly Kone hamburgers, Alaskan Amber Ale, the East Walker River, and a trip to the hot springs to cap it off. 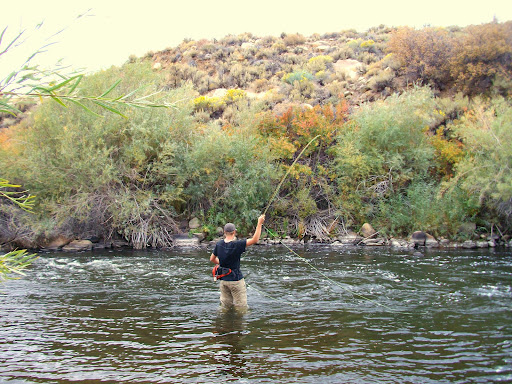 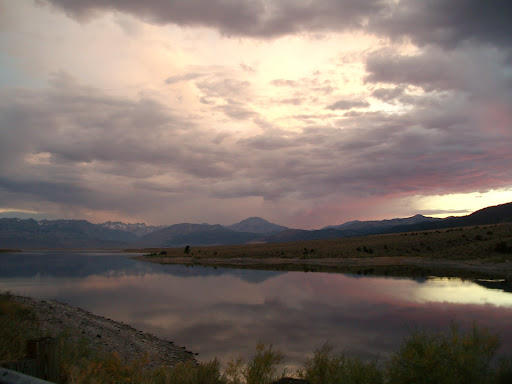 Sitting in my favorite little puddle on the planet. 105 degree water, and this view. Add a cold beer and a beautiful woman, and I was a very happy man, regardless of how crappy the trip was for awhile. 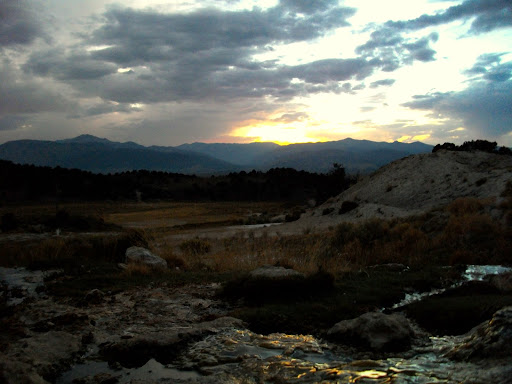 Well, here comes the diagnosis of where we went astray. We stopped in Ken's and I bought that damn map that I didnt want to make a detour for. As it turns out, we were supposed to hike up the other fork of the river, on the complete other side of the ridge. Somehow, despite all of the research I had thought I did, that most rudimentary of facts had escaped me. I felt then, and feel today, like the biggest tool on the planet. I was so confident in what I thought I knew that I broke the code and didnt bring a map. It was not a matter of safety. We always knew where we were in relationship to the car, but that didnt help us get to the lake. Take a dang map people. You dont want to waste the time, energy, money, or relationship stability that I did because you dont want to take a detour and pick up a map.