My buddy and I planned a two day banzai run to the Sierras for this past weekend. We had the dates set quite awhile ago. As the date loomed near, so did one hell of a storm system. As per our usual modus operandi, we spat in the face of mother nature and decided to go for it. Initial plans called for day one to be on the East Walker and day two to find us plying the seams of the Truckee and Little Truckee rivers.

After a three and a half hour drive into Bridgeport, we found ourselves donning waders and stringing rods in the windy parking area at the base of the dam. We initially saw only one other vehicle, and I prematurely surmised that the weather had scared off all of the fair weather fishermen, and that we would have some elbow room. Wrong. The East Walker on a weekend in October without crowds? What was I smoking. Anybody who has fished the Miracle Mile of the East Walker knows how it is with the willows. You bust your way through the leafy mass only to see angler after angler. You turn around and try another brushy tunnel to the river. After quite awhile of fishing mediocre water because of too many anglers, we finally got onto one of my favorite stretches of stream.

One of the main reasons that I had chosen the East Walker for one of our days was to get my buddy Brandon on some fish. He only had one measly little fish to his name on the fly rod leading into this trip, and I wanted to get him on some fish, and more importantly, get him trained in the art of nymph fishing.

Upon finally getting on a good stretch of water, I coach him into position quartering downstream of a very nice seam formed by a good sized rock. After only about 10 minutes of coaching him on getting far enough upstream with his cast to allow his bug to sink, and getting him the basics of mending, his indicator snapped down and he lifted into a quality EW brown. He was all grins, even after the tiny Zebra Midge pulled free of his quarry's face. His confidence well in hand, within a matter of minutes, he managed to give another Brownie a tiny piece of lip jewelry and take it all the way to the net. A solid 17 inch brown marked his first East Walker fish, first quality fly caught fish, and first nymph fish. Success, the pressure was off of me to get him on something, and he had the confidence to continue getting bit regularly.

Ok, pressure was off of me to get HIM on fish, but as of yet, 2 hours into our day, I hadnt managed to get a fish to hand, despite getting bit and hooking several fish. I had been fooling around with the normal smaller bugs that usually produce for me there, and after awhile I decided to try one of the crawdad pattern flies I had devised for the Truckee and Middle Fork American rivers. Second drift through a pretty deep and heavy seam, the indo jumped down and I lifted into a very ticked off fish. I didnt get eyes on it for a minute or two, but it came up and rolled about 30 feet from me and I realized that I had my first good size East Walker Rainbow on the line! After a very fun, drag singing fight I managed to slide her into my too small net and get a quick snapshot and send her on her way. She was way too feisty to get an exact number, but certainly over 20 inches and very fat, clean, and healthy! 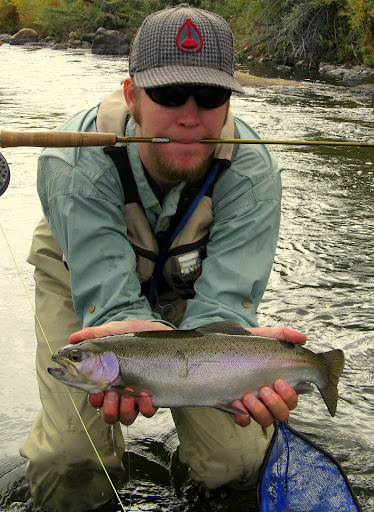 Our day wore on. Getting a few fish here and there. With Brandon quite thoroughly outfishing me, although most of his fish were very small. Like 6-7 inches. Never seen that on the EW! We each caught another rainbow, both of which were around 10 inches but very very pretty. Got a couple nice browns, but nothing bigger than my rainbow. The place stayed very crowded. There were three guided groups of 4 anglers each that made finding water pretty tough. But there were no real issues with being crowded by someone and all of the guides and clients were very nice and we had some good on the water BS'ing sessions with several of them.

By the time the sun hid behind the ridge, we were on our way to the Sportsmen's bar and grill for hot food, cold beer, and the last game between the Giants and the Phillies. The whole time trying to figure out what we were gonna do with some real weather headed our way the next day. With predicted 105 MPH winds coming over Donner Pass, we decided that perhaps the Truckee just wasnt in the cards for us on Sunday. We opted to crash in the car near Bridgeport Reservoir, fish the East Walker in the morning and then hit the East Carson on our way home.

Our morning session on the EW was pretty miserable with myself getting 1 little fish to hand, and Brandon getting a couple nice Browns and dumping several others including a pretty good size one. By 11, we were on our way down 395 and jumping over Monitor Pass to the East Carson. It was already completely blown out, lookin like Yoo-Hoo, so we audibled yet again and decided to fish the West Carson for as long as we could stand the blowing rain. We fished the Hope Valley for about an hour and a half. The WC was a little off color, but perfectly fishable. I managed two little rainbows to Brandon's zero and we called it a day. Pretty fun trip. There were plenty of elements that could have been much better. But I will take a big wild 'Bow out of moving water any day.

I am guessing that my backcountry exploits are done for the year. But there is a slight chance I might be able to make a ninja run up to my big Brown lake for one last hurrah. Other than that, I'm gonna spend the winter at lower elevations or on the EW and Truckee. There is even talk of Leopard Sharks on the fly at some point before my 2011 backcountry season kicks off. I'll keep you guys posted.
By Jay at 2:46 PM