Some guys STILL have it easy!

Some of you will remember a few months ago I put up a post detailing a trip I took with my buddy Steve. He got his first Golden Trout with me. He is a world class trophy bass fisherman normally, but he had expressed some interest in fishing some moving water with a fly rod. I was all too happy to oblige him.

We finally managed to get a trip lined out this past Sunday. Our destination this day was to be the Truckee and Little Truckee rivers of Northern California. Both of these places are well known for their difficult and technical fishing. They are also known for their big fish. You time it right and you have a chance.

I lay in bed the night previous, dreams of Blue Winged Olives clouding the air and images of trout heads gently poking out and sipping a size 16 BWO Comparadun filling my sleepless mind. Eventually sleep came, and as is only the case on fishing days, I awoke happily to the sound of my alarm.

A short drive over beautiful Donner Pass and we soon found ourselves stringing rods and donning waders in the crisp air of a gorgeous fall morning. Not 100 yards down the trail from the car I spotted a giant brown trout, obviously on a redd. We both guessed it at about 7lbs. Oh man! We left the spawning fish alone of course, but it's presence indicated that big fish were definitely in the system, and not all of them would be on redds yet.

Since Steve was new to fishing with a nymph and indicator, I opted to set us up in a piece of mediocre water for his initial training. That way we were not spooking fish with errant casts, bad drifts, and the like. After giving him the quick run down, it was obvious that he got the gist of it. It is only a thing of logic and he grasped the general concept immediately. At one point a pretty nice fish came up and whacked his orange indicator. That got me hoping for fish on large October Caddis patterns, but that was not meant to be. After a few minutes of fishing that run, I moved him down to a run that always has big fish in the spring and fall. Sure enough, after only a couple seconds of peering down into the churning current, I caught sight of a big bronze and gold tail sitting right in the seam behind a rock. I lined Steve up with where to cast and mend, and he quickly had his sz 16 Micro Mayfly drifting right through Downtown Browntown. I had cautioned him that the big fish often eat the small bugs very subtly and he should watch for any hesitation of his indicator.

It has been my experience that when a bigger trout eats a fly that size, it will look as though you have just briefly dragged bottom, then they spit it. Mere moments after explaining this, his indicator did exactly what I had described. Steve lifted into a very perturbed large brown. With 5X tippet and a Brown Trout of about 5lbs on the line we knew we had to keep her out of the big fir tree laying in the water on the other side of the stream. Big browns are masters of the break off, and after about 10 seconds she started heading for the tree. His options were to somehow stop her, or lose her for certain in that tree. He made the right choice and palmed the spool, but she was just too strong for the light tippet. She left us standing, mouths agape, digesting what had just happened. Steve took it well, some high fives were exchanged, and we set out to get him bit again.

As the morning wore on, I caught a couple smaller Rainbows in the 10 inch class on a small zebra midge and Steve had a few bites that didnt stick. We worked our way downstream laughing at each other as we slipped on snotty rocks and I laughed at Steves constant catches of Willow Trout and Grassfish. Despite my repeated attempts at teaching him the Steeple cast his was unable or unwilling to do as instructed. But good times were had. By mid morning the sky had cleared and we were only seeing a few scattered Callibaetis. Occasionally you would see a trout nose poke out, but there really wasnt much action.

Steve scraped up a small brown on one of my emerger midges below an indicator and that got him on the board. By then we had worked our way as far down as I wanted to in this area, so we fished our way back up, with the added knowledge of the preferred lies of fish we had spooked. We got a little separated and I had the flies, so when I caught up to Steve he said that there was a nice fish rising repeatedly in some heavier water in front of him. I quickly had him change out his indicator rig for a Comparadun stlye BWO that I had tied up, replacing the deer hair with bluish gray Antron yarn. It was an untested pattern for me, but it sure as hell looked tasty and a pretty good match for the sparse bugs we were seeing.

For Steve to get into good casting position, he was unable to see the tiny bug in fast water. This was due to his extreme old age of 40 something with poor eyesight, and glare. So I sat down and played spotter for him, directing his casts. "5ft upstream and a foot to the left! Perfect! Upstream mend! Recast! Too far right!"

After a couple minutes she finally ate it and I screamed "HIT IT!". He set without hesitation and his true bass fisherman roots shone brightly as he snapped the 5x tippet on the hook set. I am blaming it on a bad knot and a overzealous hook set.

After that we bee lined if for my favorite dry fly run in this area. As I waited for Steve to catch up I immediately saw a very nice Rainbow rising with a pretty definite rhythm. I directed him into position and he started casting at it. It wasnt cooperating and Steve had soon ran a lime green fly line over every fish in the run and had done his best impression of a Wildebeast crossing the Zambezi as he splashed around everywhere. He soon grew weary of these "uncatchable" fish and moved his way upstream. There were more bugs coming off now, and I realized that it was a matter of time before this run healed and fish started munching again. After about ten minutes of sitting there watching, they had recovered and I knew the whereabouts of half a dozen of them. I cautiously moved into position and started casting to the closest fish so as not to spook them with my line. I spent the next 20 minutes watching dozens of rises, changing through a whole pile of dries, and never getting bit.

It should have occurred to me much earlier that the fish were focusing on emergers and ignoring the adults, but I am dense, so it did not. But once the realization hit me, I started digging through my dry box and I tried a couple emerger BWO's. They were at least getting looks now, even though they all ended up being refusals, but I was obviously on the right track to getting one of these fish to make a mistake. There was a large Rainbow that I had been toying with and it was sipping away at regular intervals. Sometimes it was poking its head up a matter of inches away from my impostor, but never more than glancing at what I proffered.

Finally I remembered that I had tied some parasol BWO's up for a trip to Colorado and they were still waiting patiently in my nymph box. This is not some particular pattern that I am aware of. Just something I cobbled together. 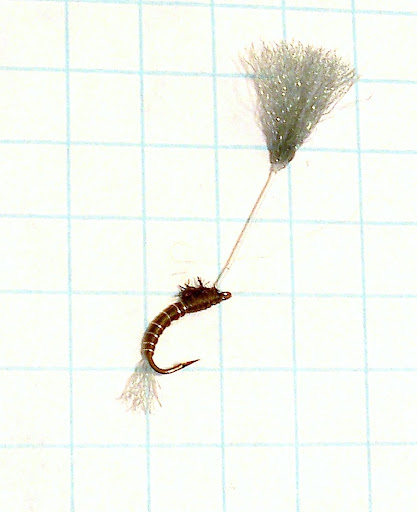 After tying on and greasing up the parasol part of the fly. I cast out upstream of our target audience. By this point these fish had me so demoralized that I almost didnt pull the trigger when she sipped on the very first drift. Game on! The 'Bow was feeding on the other side of the fast water from me and that is where it immediately headed to. Did I mention that sometime before this hookup I had switched to 6X tippet out of shear desperation for a hook up? Well, I did. Now I had a cheesed off Rainbow bulldogging around in some pretty noteworthy current, with a size 20 barbless hook pinned to its lip, and tippet that will break if you sneeze while tying it on. Fan-freaking-tastic! Suprisingly, she settled down pretty quickly and was content to just stay in the current and more or less do nothing besides counter my attempts to gain line. No maniacal runs downstream or for cover. Just a petulant refusal to cooperate fully. After a few minutes of putting all the pressure on her that I dared, I finally slid her into calmer water and my waiting net. She taped out at 21" and was a great reward for the hair I had pulled out trying to get one of these suckers to slip up and make a mistake. 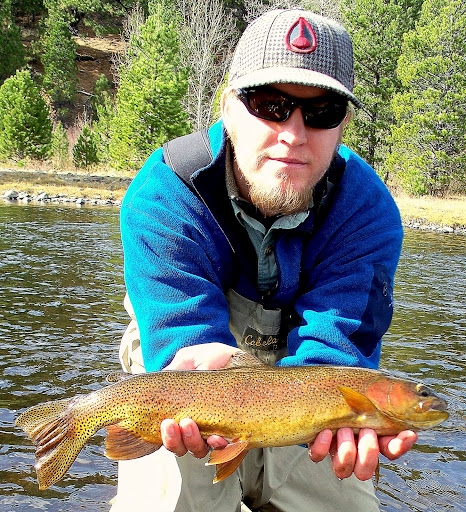 I fully acknowledge this photo to be sub-par. But I wanted her back in the water quickly after her drawn out struggle. It is what it is.

I handed my rod off to Steve, little parasol still attached, and observed as he proceeded to miss three or four fish on it. After the scant Baetis hatch had died off completely, we decided to make the move and finish up our day in the canyon stretch of the Truckee River proper.

The evening ended rather uneventfully. Over a couple of hours I managed to triumphantly stick another 10" Rainbow on my freshly concocted attempt at an October Caddis nymph. Pretty barebones, but it worked. 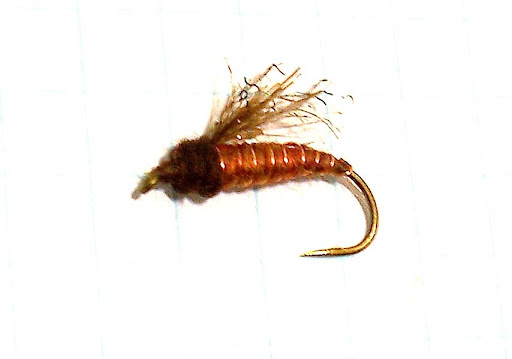 That saw the end of our day. Not a ton of fish. But we got to play around with a couple good ones. As always, I had a blast with Steve and I think we are gonna be doing it again soon.
By Jay at 3:16 PM