I Have Made The Pilgrimage, My Eyes Are Open

Well, after a couple years of almost making it, I finally made my journey to one of the West's fly fishing Meccas. Pyramid Lake.

Steeped in lore, resplendent with with large Cutthroat, and unique in it's fishing. It doesn't take long, living where I do and being a fisherman, before the name Pyramid is heard uttered. Be it in hushed tones and knowing smiles, or by chest thumping bellows, you will hear about Pyramid Lake. One of, if not the last true strongholds of the Lahontan Cutthroat Trout. The biggest of the trout family, believed to have once grown in excess of 60 pounds, this is where they lurk. One of the interesting nuances of this place, as a fly fisherman, is the nearly compulsory use of a step ladder. This natural lake is almost entirely surrounded by sandy beaches, with a barren flat extending some distance out into the lake. The ladders are used by wading out until you approach the first in a series of ledges. Then you set the ladder down, climb up, and are out of the water and waves, with some altitude to enable the long casts necessary with a shooting head or fast sinking line. You can only hear so much, as a fisherman, before it is too much to bear and you have to see it for yourself.

Early Saturday morning, my buddy Brandon arrived and in the darkness we ironed out the logistics of fitting two six foot ladders, stripping baskets, a plenitude of fishing gear, and our sleeping bags into a two door Civic, with room left for two guys over 6'6". Outfitting the Civic for expeditions such as this is old hat for us, and we were quickly on our way, with a trunk lid bungeed down over a couple ladders.

This drive, although only a couple hours is a gorgeous slide show of the varied terrain in the Sierras. Our journey started in the low foothills of the west slope, open grasslands and oak groves. That disappears as you gain a little altitude and the hills get bigger. More and more you find yourself in beautiful coniferous surroundings which quickly give way to the famous granitic landscape so often associated with the Sierra Nevada. After cresting Donner Pass and dropping into the town of Truckee and the Eastern slope, the rain shadow effect becomes obvious and the terrain reminds me a lot of my home country in the Rockies. I love the high desert. Long views, sage, solitude. Donnor pass was beautiful, as ever. Some snow on the mountains, but none on the roads. After stopping at the Truckee McDonalds for some saturated fat and caffeine, we fought the urge to stop and ply the Truckee river and forged ahead to Reno.

The pock mark that is Reno was lost to memory as we pulled off of I-80 and found ourselves in the beautiful, spacious high desert of Nevada. Soon we entered the Pyramid Lake Paiute Reservation. Since I was a kid, the anticipation of seeing the lake for the first time has always thrilled me. As the strange robot lady on the GPS gave updates, I longed to see our goal. As we came up a slight hill, you could plainly see that there was a massive basin on the other side, and my first view of our goal was a captivating one. The early morning sun blazed through the clouds shining it's rays on a thing of beauty. I love desert lakes. The stark contrast of indigo blue waters set against a moonscape of sage and rocks is something that will never get old for me.

After a quick detour to the ranger station to pick up a map and our tribal fishing permits, we soon found ourselves driving down the highway on the western side of the lake gawking like Japanese tourists at Graceland. A few miles later we arbitrarily picked an access point and Brandon skillfully guided our trusty steed down the nasty little road to the beach. I stepped out into my own personal wonderland. The barren moonscape, the giant sapphirine puddle in front of me, and the onslaught of wet sage on my nose was sensory overload. What a place. I cannot imagine what it was like for John C. Fremont to lay eyes on this place for the first time, not expecting it. "Beyond, a defile between the mountains descended rapidly about two thousand feet; and, filling up all the lower space, was a sheet of green water, some twenty miles broad. It broke upon our eyes like the ocean." He was the first white man to see this place, as well as Lake Tahoe. There is a very real and very large part of my being that is green with envy.

Anyone who has ever fished with me knows how much I hate getting rigged once we get to the lake. When I used to bass fish all of my rods would be strung and I would be fishing before my partner could even park the truck and trailer. Fly fishing is a different ball game, and my desire to get to fishing is usually quashed by the tedium of getting all my gear ready to go. This was no exception. Extricating our gear and ladders from the packhorse ate up a bunch of time. Then you have to set up the ladders with nets and stripping baskets, get your waders and boots on, assemble rods, string lines, attach leaders, attach tippets, attach multiple flies. With giant trout swimming not one hundred feet away, the tedium of assembling all that junk was maddening! After twenty minutes of jacking around, we were soon ambling down to the water, albeit not very gracefully when tromping through the sand carrying a big construction ladder.

After wading out near the break, I finally got to set up, flip out a line, and take in the stunning beauty of where I was.

Within fifteen minutes, I heard that unmistakable sound of a flyrod being drawn tight and looked over to see Brandon's flyrod gone bendo on a fish. He soon scooped up a nice 18" Cutthroat and the expedition was on the board! I spent the next couple hours learning how to cast a 20ft shooting head made out of leadcore line, and missing a few fish. Brandon had his share of swing and misses as well, but we went fishless.

There were a few boats around, all trolling with conventional gear. One boat loomed a little closer than I would have liked, and I heard the sound of a drag screaming for mercy. "Way to go jackass, you're hung up, thats what you get for getting so close". Mrs. Jackass grabbed the rod and it soon became apparent that they were indeed not snagged. After a few minutes the guy dips the net over the far side of the boat and scoops his quarry. As he hefted it aboard, I looked over at Brandon seeing the same awed expression that I knew my face showed as well. It was a good fish. They were a little too far away to tell what was going on, but I heard them ask another boat if they had a big scale. They did not, but we did. We wanted to see this fish, so we waved them over to hang it on our scale. I jumped off the ladder and waded in a little deeper to catch the boat. As they pulled up, I was blown away. This thing was massive. The people were really nice. They couldnt get a stable weight on the fish, the gentleman was older and couldnt hold it very steady, plus a rocking boat makes it difficult to get a good weight on heavier fish. So I hung it for them, arms over my head to show them the screen. It went 14lbs 11ozs and they said that it taped at 34.5 inches. MONSTER! They couldnt reach over the side of their boat to release it very well, so I was given the honors. After a couple pictures, I am happy to say, it was on it's way, to fight another day. 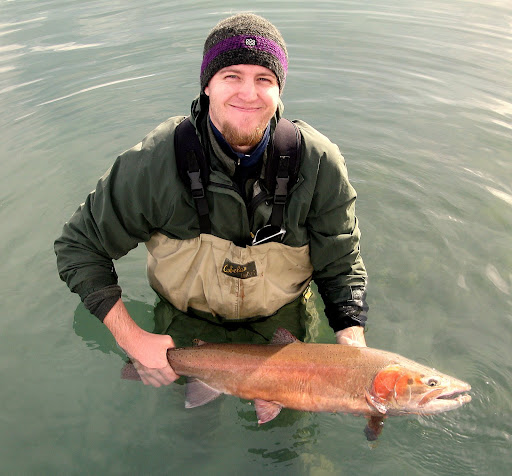 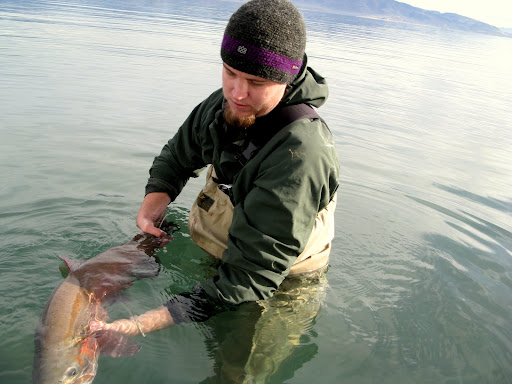 Our confidence restored, and minds adequately blown, we went back to fishing. We fought hard, moving down the lake to another beach. We worked and worked, casting from 8 in the morning to nearly 5 o'clock that evening. Unfortunately, the day would end with me scraping in a single fish in the 18 inch range and a few missed strikes. 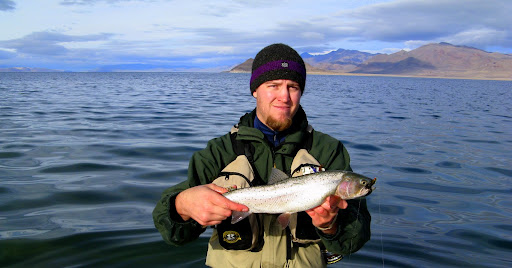 Despite the slow fishing, for some reason, we were still having a ball, and opted to spend the night and give it another go on Sunday. We drug ourselves to the Crosby Lodge for tasty burgers, beer in the can, and sat there in a zombified state until drunken karaoke finally drove us off. We drove back down to the beach we planned to fish that next morning, chained the ladders to the car, and watched a movie on Brandon's phone with the audio running through the car speakers. Fremont's expedition did not have that! After a restless night sleeping in the front seat of a little Japanese car, dawn could not come fast enough!

When it finally did, we found ourselves again chucking streamers, perched atop our fiberglass vantage points. It was a clear day, the wind was calm, and the fish were uninterested. By 10 a.m. we had one missed bite and no fish to show for our efforts, so we again packed up the ladders and headed to the Nets. The Nets is the most popular fishing spot on the lake, and can become quite crowded, so we had avoided it. When we arrived we were pleased to see only four or five guys stretched out across several hundred yards of beach, plenty of room. This beach has a very large flat, so we waded out about 75 yards before planting our ladders within reach of the ledge. This area is also a great spot to see the lake's namesake. 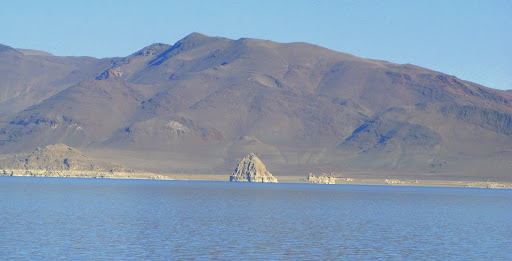 We fished streamers for another hour or two before I got frustrated and switched out the spool on my 8wt, changing over to my floating line and rigging a couple midges under an indicator. I had nearly given up on fish, so I was just planning on being lazy, only having to cast every 5 minutes or so as the wind blew my indo back to me. On my second cast, the indicator shot under the water and I set a little to hard into the fish, partially straightening my hook and missing the fish in the process. I of course thought I was really onto something with this midging business and suggested that Brandon do the same. That was how we ended the day, staring at bobbers, Brandon missing a solitary fish, and me getting not another grab.

So, we fished very hard for 2 full days, with only 2 fish between us. But somehow, inexplicably, we both had a very good time. I cannot explain it adequately, but there is something about this place. It is nearly mystical. It has a personality. Whatever it is, I cannot wait to take it in again.