My buddy Brandon and I made our second visit to Pyramid Lake in Nevada this past weekend. We had originally planned on doing another two day trip, but Brandon's schedule ended up leaving us with only a day to fish. He met me at my house at 4 a.m. and we were off.

It was cold, dark, and foggy for much of the drive. After stopping for breakfast and fishing permits, we found ourselves setting up our ladders and assortment of gear by 7:30.

It was cold, so I layered up a bunch and shuffled on down to the water. I set up my ladder, climbed up, stripped out my shooting head and 15ft of amnesia running line, flipped it out, then I started stripping the amnesia off of my reel and stretching the memory out between my hands. My rig had been sitting motionless on the bottom for a minute or so while I straightened my running line when I felt a little tug on my rod tip. I struggled to get ahold of the line and set the hook. I did manage to hook the fish that bit me 60 seconds into the day, but I soon lost it. We thought it was gonna be on!

We fished for another couple hours with a couple bites here and there, but no more hookups, the whole time busting ice out of my guides I started to wonder if the first cast curse had struck me again. About that time I reset my ladder to fish a different part of the break.

Within a couple minutes of fishing this new angle, I felt just a little hiccup in my painfully slow strip and drew tight to a heavy feeling fish. The fight took a minute or two and Brandon soon slid the net under a quality Lahontan Cutt. 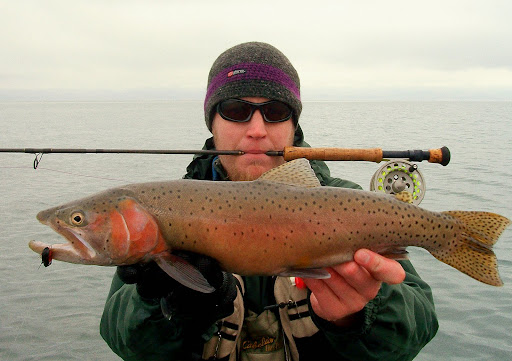 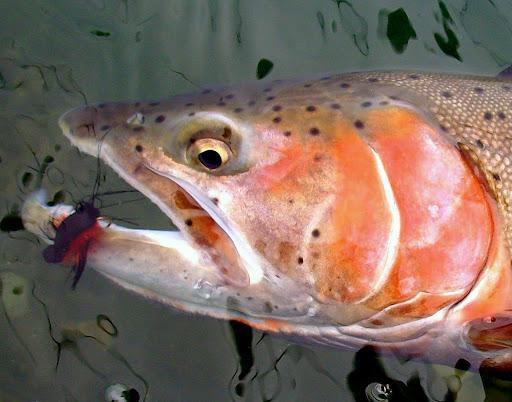 After our little photo shoot and a high five, I climbed back atop my lofty perch, bombed a monster cast out into the depths and started my slow strip. As soon as my rig came to the ledge it got whacked again and a pretty Cutt in the 20 inch class found it's way to my net. This started a pretty intense flurry of activity for me and I landed a couple more fish, lost one, and missed several more in about 20 minutes. They were all about the same size and it was a blast there for awhile. 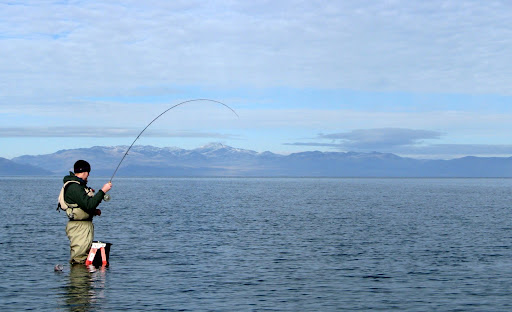 It slowed down after that and I'd get bit every hour or so. I missed most of them but got a couple more to hand throughout the day, none of which were larger than that first fish I landed. Brandon was really struggling having not hooked a fish by 3 pm. That was the time that the sun ducked behind the range at our backs and the freezing temperatures started again. Finally I looked over and saw Brandon snap tight on a fish and within an hour he had landed two respectable fish and we were on the way home. Frozen to the bone after standing in 40 degree water all day, but completely stoked on the fish we had managed to catch, and just the whole experience in general. Pyramid is a very cool place. 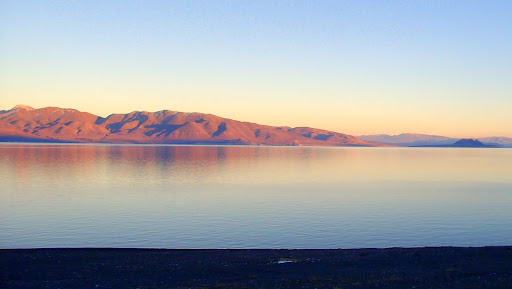