The last few winters that I have spent in California have been a major drag. When I was still trophy bass fishing, it was really really tough just to get bit on the big baits. Most trips were wet and windy. Since I started backpacking and fly fishing again, the winters have been nothing but a forced break from what I wanted to be doing. This year I decided to make a concerted effort to keep fishing during the winter. Because, as anyone knows me will tell you, the date of my last fishing trip is directly related to my outward demeanor. Pyramid Lake has been a fun place to get out and whip a line through the air. But yesterday showed moving water trout on the menu, and in the days leading up to it, I could not have been more excited.

The East Walker below Bridgeport Reservoir was our goal. I set out with my buddy Brandon and Brandon's dad Kevin, who had yet to land a fish on his fly rod. By 9 am we had finally arrived. Upon vacating the truck we were smacked in the face by the kind of cold I haven't really experienced since living in Colorado and Wyoming. It wasnt sub zero, but it was in the teens. A far cry from the winter mornings I have been used to lately. We were all well equipped for it however so after rigging rods, pulling on layer upon layer of clothing and my waders, I was down the snowy trail. Brandon and Kevin were gonna be awhile, so I went prospecting. After toying around in some heavier water for a few minutes, I slid down the run to the bottom, where it was slower and a few feet deep. Within a couple drifts, my indicator twitched just a hair and I lifted into a nice little rainbow. I quickly caught and released two more of it's class and was dunking my rod every few minutes to thaw the ice out of the guides. I saw the guys step into the river a hundred yards down from me and I waved them over to where I was.

It was clear that there were more fish to be had in this hole, owing to them rising rhythmically to tiny midges. Since Kevin was completely new to fly fishing, I directed him out into the river just down stream from where the fish were holding. It took about ten minutes of coaching before I saw his indicator twitch and started yelling " FISH! FISH!". Kevin was a little slow on the set, but a couple drifts later he reacted in time to my maniacal yelling and had a nice 15 inch East Walker Rainbow flopping around in his net. His first fly rod fish was in the books. I coached him for another half an hour, just working on casting, mending, positioning and the like. I then moved up to the outlet of the reservoir for a while and caught several small Rainbows in the 10 to 12 inch range, and one adorable pip squeak of an 8 inch Brown. By then the fish the other guys were fishing for were ready for a break and we ambled downriver in search of fresh targets.

Its a pretty good hump from where we were parked to the bend in the river that I thought would have fish stacked up in it. Unfortunately, when we finally arrived, there were a couple anglers fully capitalizing on those fish. We ended up fishing the run directly above them for awhile, so as not to crowd them. Brandon had a pretty big brown eat his little midge but was unable to hook it. I managed one bite that brought this gorgeous 16" brown to hand. 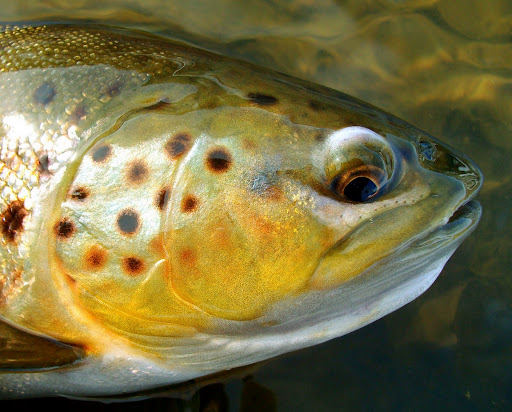 I sat down for a few minutes and watched Brandon trying to get that big Brown to give him another shot, but it wasnt meant to be. 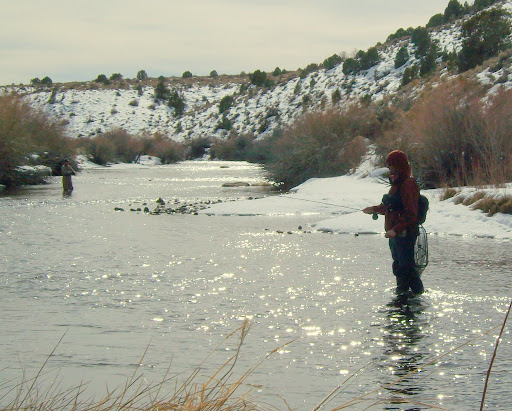 The middle of the day was a bit of a downer as we muddled around downstream trying to find cooperative fish. There were some slower areas clearly holding fish, but they were shockingly spooky. I am used to the denizens of the East being really selective to clean drifts and small patterns, but they will usually just ignore you as your bug floats by time after time. But not this day. I led the troupe to a slow lazy run and as soon as we saw the water, we could see a half dozen fish rhythmically taking midges from the nearly glassy surface. But as soon as our feet touched water, the action stopped and didnt ever start again in the 30 minutes we were there.

This particular stretch was full of fish, but they all spooked as soon as I got out of the truck and started walking down the road, some 20 ft above them. Not what I am used to on the East for sure! 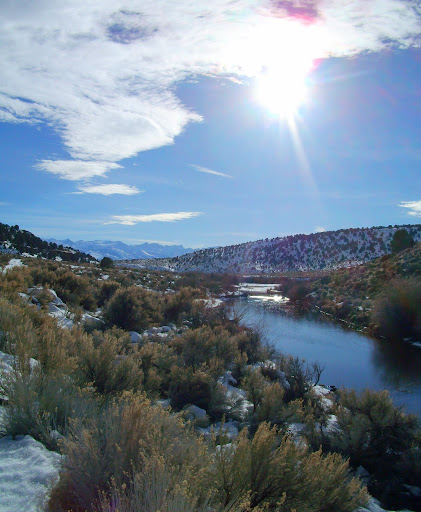 At that point we tried to return to the bend where the guys were before, but in the 3 hours since we had been gone, they had not moved an inch! We'll just assume they stayed on fish all day!

So, we opted to return to our original run. At first it seemed as though our damage had been done and the spot was done for the day as well. But as the sun dipped behind the ridge across the river from us, gentle rises could be seen occasionally and my indicator finally jumped to life with this pretty brown struggling for freedom a few feet below it. 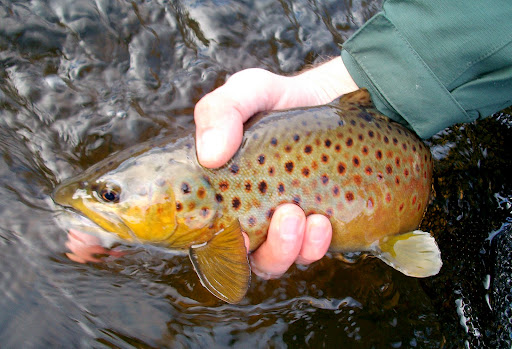 I caught a couple more smallish rainbows and and so did the other guys. Brandon hooked a pig of a rainbow but wasn't able to seal the deal before the little size 18 Zebra Midge tore loose from his quarry's face. Finally, with the sky getting dark, our bodies and rod guides frozen, we called it a day.

Once again, one of my favorite views in the world, looking southwest from the dam at Bridgeport Reservoir, was awe inspiring. 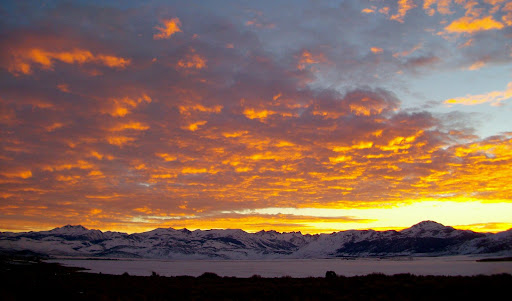 A perfect close to a great day of winter fly fishing in the Eastern Sierra.
By Jay at 4:05 PM